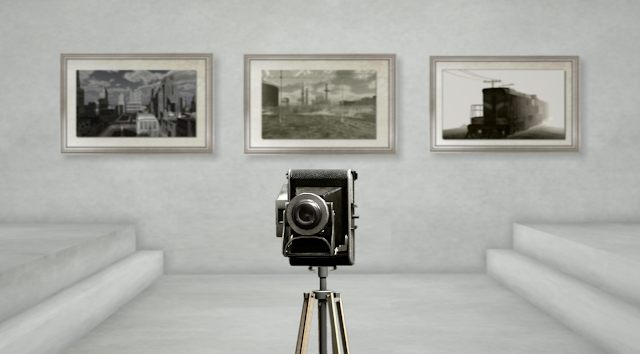 My archive of Second Life photos includes some huge series, whose main feature is "documentary", although I don't think that photos of this kind are so differerent from "artistic" ones.
Posting on my Flickr these hundreds pics series at the same time would be annoying and confusing: Flickr users do prefer watching the few ones of the daily stream. On the other hand, scattering them among the other images I post daily would diminish the coherence and the meaning of the series; that happens with "Americana", 500+ images of whom can be seen together only in the relevant Flickr Album. Unfortunately, albums can't be organized in thematic "chapters", as I wanted to do with that huge material; then, that series will find its better home here, increased up to almost 1000 pics.
I gathered also other large thematic collections in this blog, where it will be easier to enjoy their entirety. They are something like Virtual Exhibits: beside the whole Americana series, in this blog  will appear the results of my SL explorations in the worlds of Industry, Trains and Cities.
Along with the documentary series, I posted here also some special ones (Building Images): Quartets is a collection of abstract shapes taken from SL photos and composed according to their colors or lines; Frames is a divertissement  I made designing and composing geometric textures in Photoshop; Fragments shows fragmented and framed images.
Finally, I posted here some of the exhibits I made inworld, and the slideshows I posted on Youtube, to keep memory of them.
To complete the overview of my work, I posted also a CV, a collections of bloggers' reviews of my exhibits, my writings about photography and a page where I put samples of artists who influenced my work (Mentors).
Enjoy all pics by clicking on their sections' titles on the side menu.
New series, however, will be announced even on my Flickr page.